This fall I was shopping for baby L and found myself rejecting an entire rack of holiday dresses because “frilly things look weird on her.” Something about that is true…I think? When I’ve put her in super girly stuff R and I agree that something seems off. Maybe it’s her lack of hair? I have a picture of myself at around 18 months in tiered ruffled lace, and it looks so odd underneath my glaringly bald head.

It could also be that I’m projecting wardrobe preferences onto the baby, because I’ve looked through her clothes drawer and it’s verrrrry familiar. No browns or tans. Hardly any pink or yellow. Lots of black pants with bright tops, bright pants with black & white tops, etc. Oh and a cat shirt with sparkles, which I would wear if I thought coworkers would take me seriously in it.

She’s built kind of spindly and narrow, so I’ve taken to putting her in leggings. I even sewed a couple pairs this fall so that I could make them extra narrow and extra long. 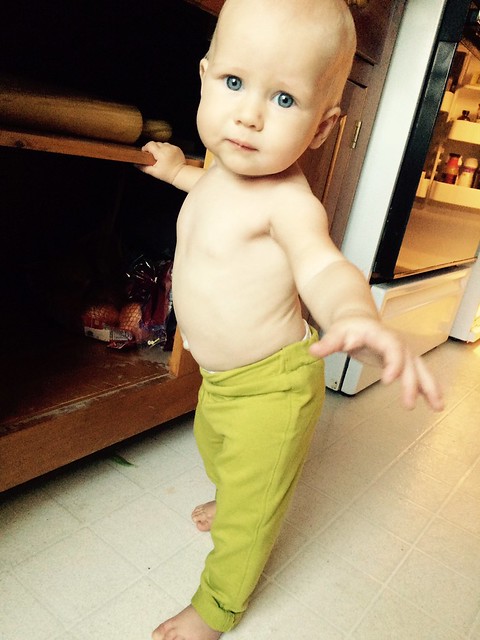 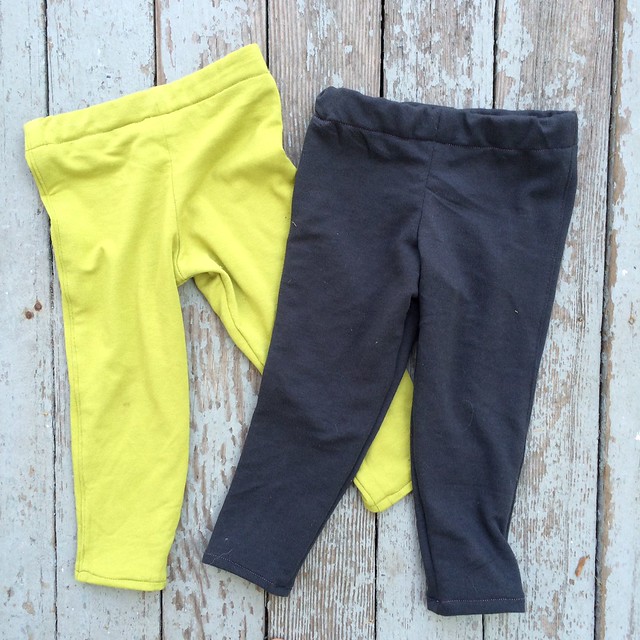 And what looks better with leggings than tunics? I knit a dark teal version of Like Sleeves for Babies. It’s a little short and wide, so if I knit it again I’d lengthen it so that it could start as a dress and become a tunic as she grows. 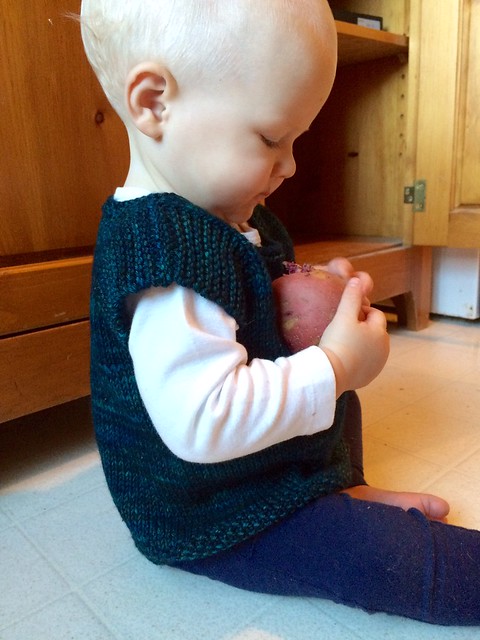 The other thing I’ve been busy making is hats. This kid’s head circumference is >99% on the CDC charts. It’s a seriously impressive noggin and it’s required a set of progressively larger garter earflap hats. I love the pattern though – it’s everything you want in a baby hat but nothing extra, and it’s a great use of handspun or partial skeins. She just doesn’t always want it on her head. 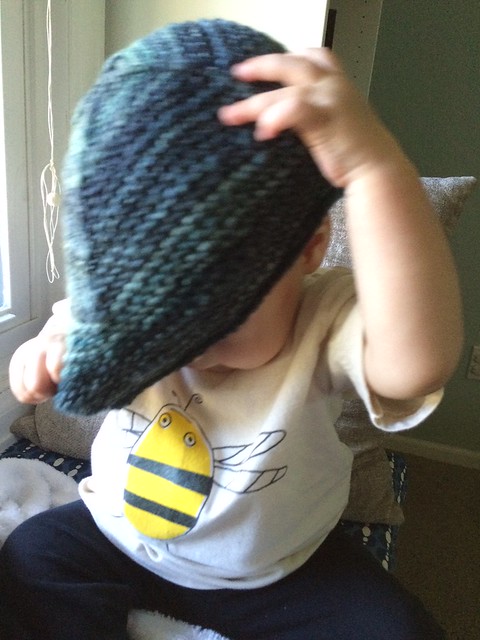 It’s the Wednesday before Thanksgiving and although my office is closed, daycare is not…at least not until 1pm. I dropped off baby L and am enjoying some coffee-and-computer-in-pajamas time. Using the laptop anywhere near baby is impossible right now as it leads to shrieking, grabbing, pressing of all the keys, and tantrums. So I’m really basking in the luxury here.

I finished up edits on the pattern, which I’m calling Yukon ho! in honor of my favorite cartoon strip, Calvin & Hobbes.

Baby L loves the outdoors, but after a year in Mexico we’re coming up on her first real winter. Most of the baby mittens I’ve seen in stores are cute but sorta flimsy, so I designed a pair that were truly adventure-worthy. The extra long cuff ensures they stay put. Every time I take them off after a long stroller ride, her hands are super toasty. 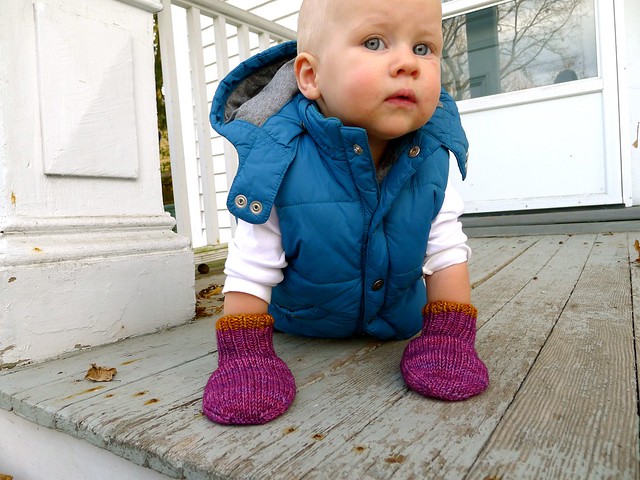 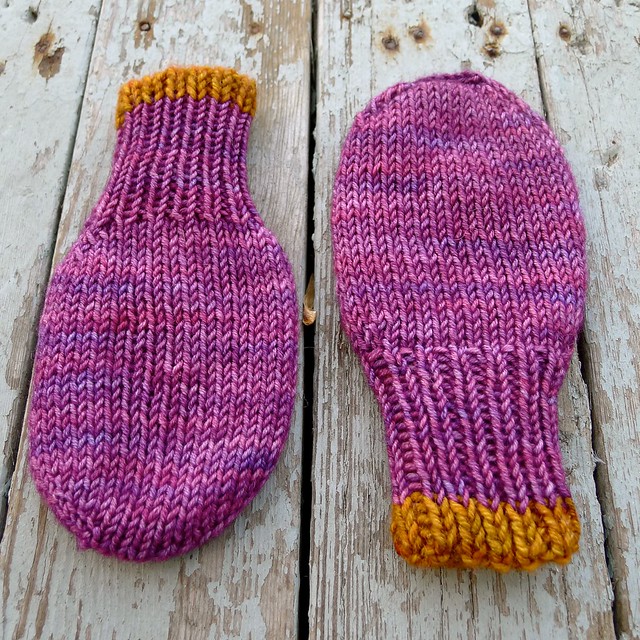 From now until the end of Thanksgiving weekend, Yukon ho! is 50% in the ravelry shop. It comes in three sizes – newborn, baby, and toddler – and is a great way to use up partial skeins you’ve stashed.

I’m working on finishing touches for a pattern…hoping to get it out in time for post-Turkey relaxation knitting.

It’s a quick pair of lined baby mittens, knit all in one piece, perfect for holiday gift-giving and personal stash-busting. I’ve made a half dozen prototypes and passed them out to friends, who report that the mittens are super warm and don’t fall off. YEAH! 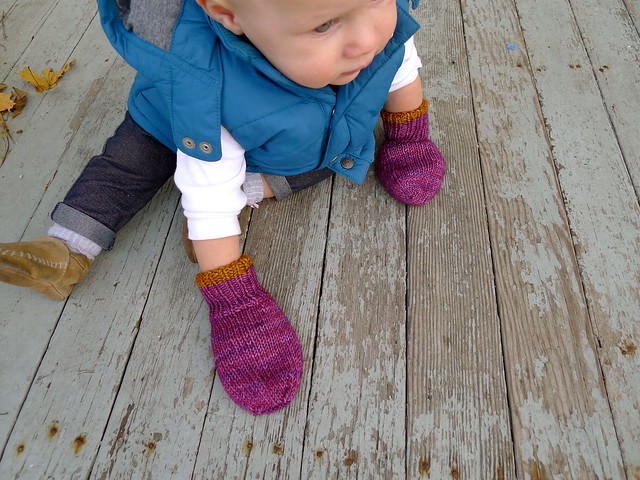 Four years ago I made my first design contribution to ravelry – a free hat pattern called Kami. Almost 600 of them have been knit!

Someone commented that she used the pattern to teach a friend to knit:

Hats aren’t often used to teach people to knit, but I think they should be. That’s because a hat is – most importantly – not a scarf. Ugh. It is unclear to me how garter-stitch scarves earned their spot as the ubiquitous learn-to-knit project. In my experience, here’s what’s wrong with them:

1. They completely ignoring purling, inevitably leading to another generation of knitters who claim that “knitting is way easier than purling.” It is, if knitting is all a beginner practices for an entire scarf.

2. They are usually knit on straight needles. I prefer teaching on circular needles, which are easier to hold and maneuver. The weight of the piece is evenly distributed on the needle, which puts less of a strain on the wrists.

3. They take forever. I warn beginners that knitting has a pretty long improvement curve. That means that you have to suffer through it feeling awkward and slow for quite a while. I know people who have been “working on their first scarf” for multiple years, or who just never finish. It’s too much work for too long without having a finished object to show for it.

4. They announce, “I knit this.” Which is alright, but most people get into knitting to make things that look handmade, not homemade.

5. They don’t require a pattern or a gauge swatch. This seems like a plus, since it takes some of the fussiness out of the process. But if someone’s goal is to eventually move out of scarf-land (i.e. sweaters, mittens, hats), they’ll need to learn gauge and pattern-reading eventually, and I’ve found that beginners are okay with both as long as it’s not complicated. Plus, knitting a gauge swatch is the perfect practice run before launching into the project.

Wow. I just hated on garter-stitch scarves a LOT. I owe them something of a thank-you, to be fair, since that’s exactly what my first project was. But I also clearly remember the first FO that I was proud of, and it was not a scarf. It was a pair of fingerless mitts that used short rows, which I spent days attempting and ripping out. In the end my pride was misplaced, since I hadn’t realized that 100% cotton would lack the sort of stretch you’d want in fingerless mitts.

Am I the only one with a strong hatred for garter-stitch scarves? What pattern did you learn to knit with? What pattern(s) do you use to teach others?

Here are a few patterns that I’ve used when teaching:

Thank you to all who expressed their love on the last post. I have been pretty successful avoiding unprompted crying over the past few weeks, but there are still everyday things that cause tears. Maybe I’ll linger too long on a photo of Sam in the apartment, or we’ll drive past his favorite park and remember all of the walks there.

It’s getting better though.

Last week a regular reader teased, “You had a baby and stopped blogging.” Hey, now, it was a little more than that. I had a baby, moved, moved again, restarted work, and my grandpa and dog died. I stopped posting, but I did not stop making. We’ll just have to endure a backlog of posts, starting with this test-knit of Mini Gale.

I got gauge and chose to knit the 2 year old size, but didn’t like how snugly it fit. This baby is average (8 mo, 50% weight and 90% height) so I wasn’t sure if the pattern ran small or I just prefer a looser sweater. I frogged and reknit the 4 year size. Much better. More like a poncho and then as she grows it will be more like a sweater.

She has a huge head and the 2 year sized turtleneck didn’t fit over it. So when I reknit I bound off for the neck a few rows earlier, then picked up nearly every stitch on the neckline edge. It’s more like a funnelneck now, and slips right over her ginormous noggin.

The yarn is handspun from that gorgeous hank that Christine dyed for me based off a photo of the Oregon coast. I didn’t want there to be much pooling, so I knit with 3 alternating balls at once.

My cousin saw these pics and asked me to make two Mini Gales for her girls and their upcoming family photo session. Red for the baby and black for the toddler. I mailed them on Friday but remembered to snap a picture. Knitting for others always makes me a little nervous, especially knowing these are for a family photo…hope they fit.

One year ago we were getting settled in Cholula. My two biggest anxieties had nothing to do with living in Mexico – they were that my grandpa would pass away while I was gone, or that Samson would.

They lived through the winter and on into spring. Grandpa grew increasingly dissatisfied with his quality of life on dialysis and at several points talked about going off of it, but soldiered on. Samson continued to lose muscle and fur, but still trotted along for his morning walks. When we got back to Ohio in May, I had the luxury of spending most of the summer with them.

And then they both passed away. First Grandpa, just a couple weeks shy of his 93rd birthday. And then, a few weeks later, Samson.

Grandpa eventually got to the point where it didn’t make sense to continue dialysis. He had made peace with the idea, and he’d talked about it long enough that we’d made some peace with it too. I will forever appreciate the honesty with which he talked about what it’s like to live to 92. He was buried in the church cemetary on the most beautiful midsummer day.

About a week after Grandpa’s funeral we made the trek back to Boston and moved into the first floor of an old Victorian. Samson came too. One week later we let him outside late at night and he tumbled in the dark and rolled down the slope of the front lawn. Without any muscle he couldn’t regain his footing, and he fell off a ledge down to the pavement.

It’s hard to write this without crying.

The day of his fall he got up and hobbled into the kitchen, so I hoped that he was just stiff and with time he’d recover. But he never did. Over the next two days he lost more and more mobility until he couldn’t get up. The vet said he’d likely injured his spine, and it wasn’t something that could be fixed. I remember thinking that I’d always assumed Sam would lose interest in food, and that would be my sign that he was ready to go. But there he was lying immobile in his bed, willing the vet to return to the treat jar on her counter.

The night before he fell Samson asked to sleep in bed with us. He hadn’t done that in years. It seems crazy to suggest it, because after all it was an accident…the fall…but Read and I couldn’t shake the feeling that somehow he knew something.

When he took his last little raggedly breath, a long, low, sad wail came out of me. My baby dog. My once in a lifetime dog. I counted once and we’d been to 24 states together. Two cross-country moves. Something like ten apartments. He was my – and then our – constant protector and companion.

So now we’re trying to figure out life without him. In some ways it’s easier – not having to be home at certain points or carry a baby while letting him outside – but still a sense of loss hangs over so many moments. I restarted my job and R. started writing his dissertation and the baby started daycare, so there’s been all kinds of new to keep us busy. But sometimes in the evening we walk to the neighborhood dog park just to watch them play and run around, and talk about how if Sam were there, he’d be sitting off to the side with us, watching the action and pondering the next chapter of his yet-unpublished-memoir. 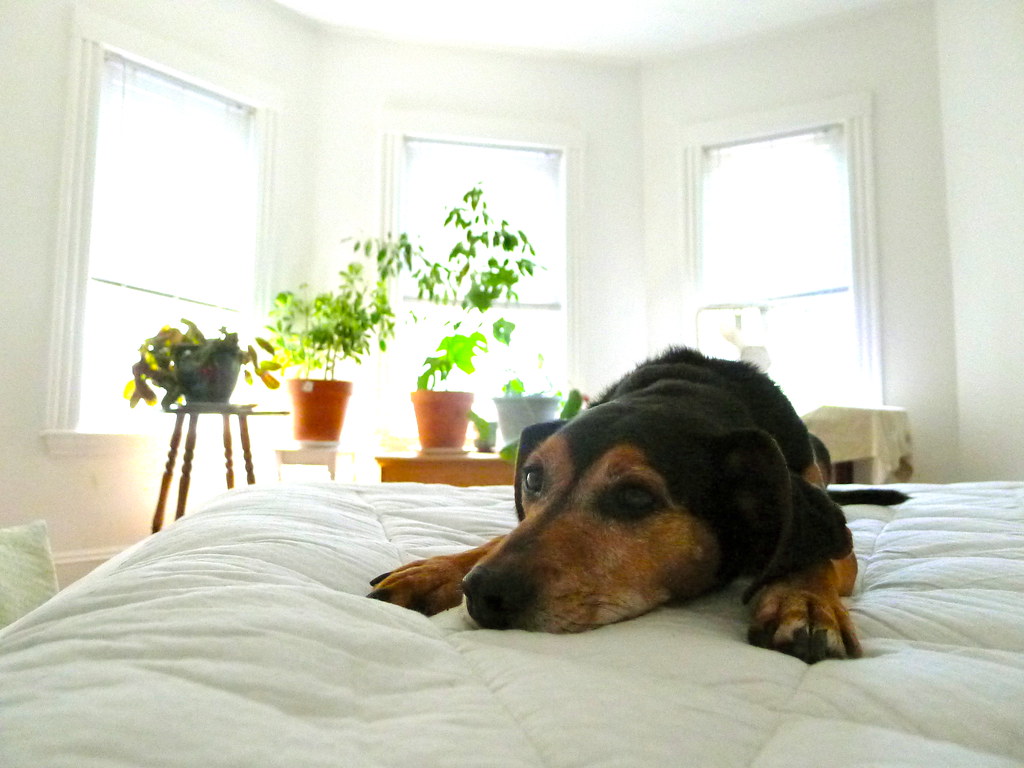 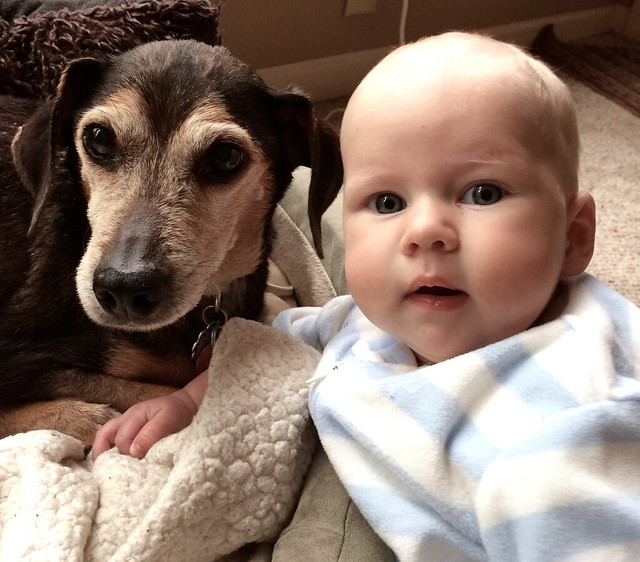 I'm Katie. I'm a midwesterner at heart but living in the Pacific Northwest. Foxflat is my digital project notebook. Click the "About" page for more.

Foxflat
Create a free website or blog at WordPress.com.